Have it Your Way – Burger King Tagline History

Burger King came out with a slogan of Have It Your Way in 1974. This slogan summed up its difference with its rival McDonald’s. The slogan fits well with the emphasis in pop culture… 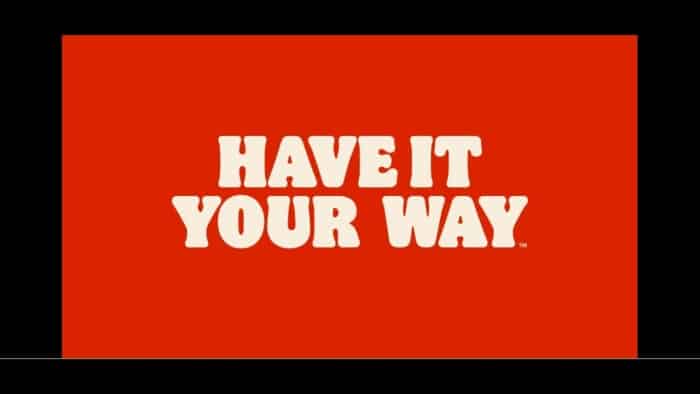 Burger King came out with a slogan of Have It Your Way in 1974. This slogan summed up its difference with its rival McDonald’s. The slogan fits well with the emphasis in pop culture and on individuality. The line makes total sense at a time when self-expression and mass customization are critical elements of culture. 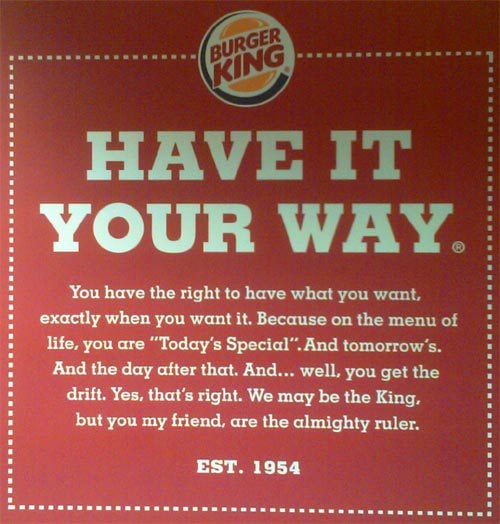 Burger King abandoned the slogan four years later in favor of forgettable themes such as Best Darn Burger (1978), Burger King Town (1986), and The Whopper Says (2001). The company, thirty years later, however realized that the retro culture is in and had gone into a back-to-future mode in its advertising. It returned to Have It Your Way in 2004 in TV ads from Crispin Porter + Borgusky, its former agency.

Research indicated Have It Your Way was still the theme that most resonated despite other campaigns. When you have an ad campaign that is sticky, it is foolish to go against said Russ Klein, the global marketing officer of Burger King. That’s the reason they returned to their earlier slogan.

Here’s a jingle that Burger King produced and used in the 70s in response to McDonald’s Big Mac song. The jingle has been modified several times and reused it. The lyrics proclaimed that Burger King would serve you a customized product (you can have whatever toppings you wanted on a burger, or even plain) living up to its slogan Have It Your Way.

Hold the pickles, hold the lettuce;

We can serve your broiled beef Whopper

Fresh with everything on topper.

Anyway you think is proper; have it your way…

Now, Can you think of conceiving a strategy that would make your target customers perceive that they are having their way with your product?