Lobster is an expressive Script font – it’s one of my least favorite fonts of all time, but I know from my search engine optimization work, that it’s something that people want and search all the time. (Keyword research)

So to help you fine people that search this god-awful font (I’ll explain more about why I hate it and alternatives later in this post) – I’m providing you with the Lobster font free download here.

Why I Hate The Font Lobster:

Examples of the Font Lobster in Use:

Bullfinch Design (from ‘Against The Lobster Font Abuse‘)

A Little ‘On The Nose’ (With Other Problems Too)

Lobster is the new Comic Sans

Alternatives to the dreaded Lobster Font:

Literally just unfollowed someone on Instagram for using the font Lobster

An often overlooked part of your brand identity is the typeface and font you choose. To assist you in finding the perfect font for your digital presence, here are some helpful tips:

Pick a Font that is easy to read. The more simple, the better. Once you think you’ve decided on a font, have others look at it and see if it is easy to read on your site.

Consider the psychology of a font. Yes, fonts can make people feel different emotions. Take a look at his helpful infographic courtesy of the CrazyEgg that talks illustrates the feelings certain fonts can convey.

5 Other Most Hated Fonts & Where to Use Them 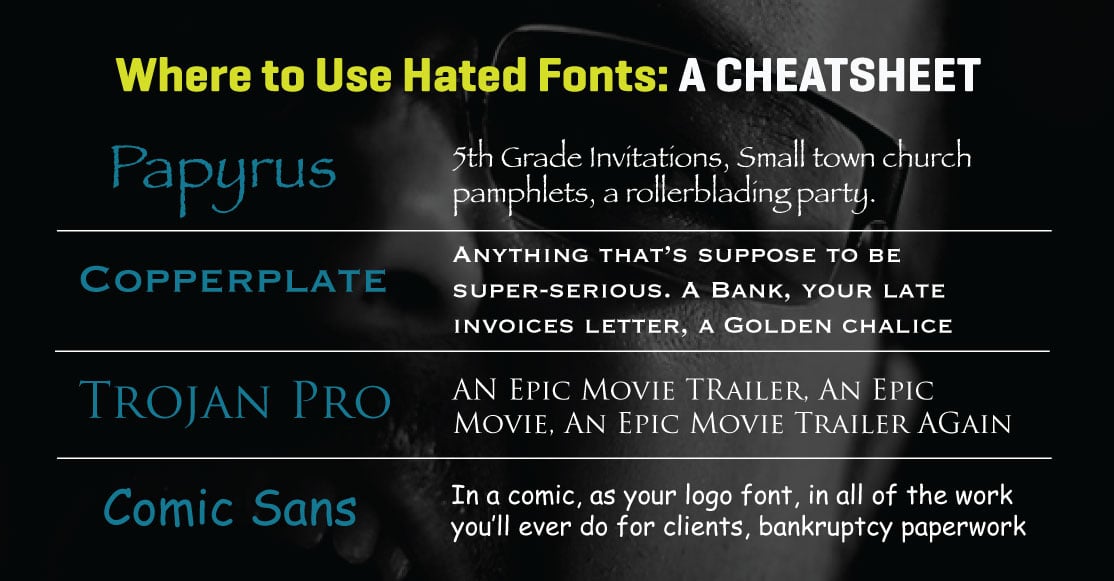 If you love annoying graphic designers, alternate using these 5 fonts and these only.

Nothing says musty church basement pamphlet, than a font that was apparently built to simulate a weather-worn English language knockoff of some Hebrew text. Good for: 5th Grade Invitations, Small-town church pamphlets, A rollerblading party

For some reason this font has become disdained by designers with higher discerning tastes than mine. Recently Mike Monteiro in Design is a Job, asserted that it’s a common misconception that Copperplate is a legitimate typeface. Perhaps that it’s been overused and has a very distinct style, copperplate is going out of style. Common uses: Anything that’s suppose to be super-serious, a bank, your late invoice notification letter, a golden chalice.

This font was for some reason overused by movies of a decidedly epic slant, then was recycled by more epic movies with a lower budget, and now has been forever tainted by it’s association with those movies. What was once a perfectly OK font, is now somewhat unsalvageable, like Ludacris’s career after a Bieber collaboration. Good for: Epic movie trailer, Epic movie, and an epic movie trailer again.

How and why am I sneaking this one in here? The disdain people feel for Helvetica seems misdirected to me, but that doesn’t negate the fact that it has a serious set of detractors. Because Helvetica represents so much of the homogenization of our modern world… because it was used to help make design more unified and simplified, some people take the stance that it was a bad sign. Then again when the swiss used Helvetica to create a more simplified and unified design theory that was more function than fancy forms they probably thought they were rebelling against the more sprawling styles that came before them. Every generation rebels against the one before it, not knowing that the generation before them, fought tooth and nail to distinguish itself from another previous paradigm. Good for: Street signs, every logo that ever meant anything to anyone, Everything that you can’t think of a better font for so you just sneak it in and justify it with a sophisticated rant on the benefits of not standing out.

The mother of all hated fonts. The original designer of comic sans said this about his creation. “A typeface is an answer to a question,” he tells me later. “Everything I’ve ever done is a solution to somebody’s problem.” The problem that Comic Sans solved concerned a short-lived Windows interface called Microsoft Bob. It featured a cartoon dog who spoke to computer users through speech bubbles. The words inside the speech bubble were rendered in Times New Roman, which didn’t look right to Connare. He thought a cartoon dog should talk like a cartoon character, in comic book writing. But the software package was about to ship – it had to be done quickly. Connare consulted several comic books, and drew his characters with a mouse to get the “wonkiness” he was looking for. “It only took about three days to get the basic font down,” he said. “You knew what you wanted.”

Unfortunately, Comic Sans outlived the dog it was designed for. It’s easy to pick on it’s silliness and it’s seeming irreverence. As designers, it’s also fun to have such a universal enemy. Good for: Use in a comic, as your logo font, in all of the work you’ll ever do for clients, bankruptcy paperwork