Mobile app development has grown into a whole industry in a relatively short space of time, powered by falling costs, rising speeds, and more powerful hardware. The industry revenue is predicted to… 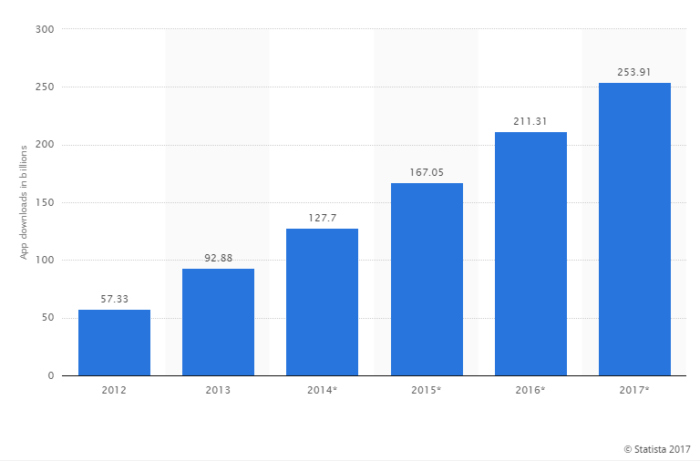 Mobile app development has grown into a whole industry in a relatively short space of time, powered by falling costs, rising speeds, and more powerful hardware. The industry revenue is predicted to quadruple from 2015 rates by 2020, and developers are racing against each other to get a piece of the pie. Here are seven trends to look out for in 2019.

Ease of use and speed are governed by multiple variables, but in each instance software and hardware developers are pushing hard to find ways to push the limits of what’s possible. Service providers are expected to begin introducing 5G wireless speeds across their networks, and what previously took a minute to download will only take a few seconds. Hardware will get faster, allowing smoother and more powerful applications to run, and web developers will streamline their coding, even more, making sites run quicker even on older devices.

Everyone looks for Apple, a company offering affordable constrain that we can say its out of the equation. Come 2019, and the app developers can be looking forward to developing the wearable devices apps and especially the smartwatches.

Today, the industry is horology and fitness industry is also looking towards the smartwatches. However, certain organizations have invested in this wearable app development such as Uber and Zomato. So, 2019 is a promising year to bring more wearables like fitness bands, watches and many more.

Rather than the clunky language-based interfaces of a few years ago, chatbot has progressed to a pragmatic and functional way to interact with services. Chatbot developers have been working hard, and the technology has now received adoption across many industries as not just an alternative but also as a cheaper improvement on traditional call-center based customer service. The process is likely to continue, as chatbots are powered up with the ability to provide specific information and services faster and easier than traditional means.

The bitcoin boom seems to be over, for now at least. After the significant bubble burst last year, prices have been steadily falling, and fewer and fewer people seem to be investing in the technology. Cryptocurrency technology is a powerful tool though, and it wouldn’t be a surprise if new users find it helpful. But mobile security is a growing area of concern for industry and consumers alike, and it may well be that this technology ultimately finds its most significant use within non-mobile cybersecurity applications

Today, most customers are demanding frictionless payment methods and especially to the apps they are using. There has shown gradual and significant change regarding the ways the customers prefer while shopping.

The world is progressing from cash to credit, debit mobile wallet, and also digital currencies. However, mobile commerce is, therefore, the most preferred shopping method. So, we expect encryption to be stable come 2019 that will make businesses create better apps such as mobile wallets and integrating payment gateways.

Machine learning and artificial intelligence have been industry buzzwords for several years now, but their widespread adoption is only just taking place. AI functionality has been narrowed down to providing improvements to services that people already use – search engines, translation software and chatbots amongst them – and the technology behind it has been heavily invested in by major industry players. The adoption of machine learning on mobile platforms has been significant; combined with elements of cloud computing and storage, it has put far more power into mobile hardware that would be possible with previous technologies.

While virtual reality technology seems to have died countless times, it’s never really gone away. Development has continued, and now, aligned with mobile hardware with built-in sensors for detecting the location and measuring distances, augmented reality has inherited many of the innovations that VR originally promised. While adoption has been in fits and starts, powered by short-living games and novelty applications, there is now widespread awareness of the possibility of augmented reality, and it seems only a matter of time before a developer finds a way to make it as indispensable as mobile mapping or social media apps.

There is the risk to sound like cliché, and therefore, we can’t emphasize enough when discussing smartphones becoming the future. It is clear after what we have seen mobile application development as it captivates the users worldwide in less than a decade. So, we are ushering in a New Year, but excitement and inquisitiveness galore will reside in different finest brains to look upon the business and the future of cell phone app development.