Guerilla Marketing: 9 of The Best Examples to Inspire You

Guerilla marketing is the kind of ‘scrappy’, resourceful ingenuity that small business owners should be thinking about. This goes beyond yard signs, and stickers on stop signs – it’s about making a… 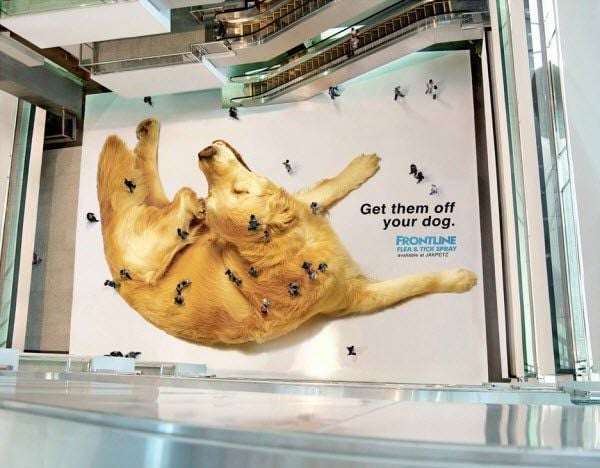 Guerilla marketing is the kind of ‘scrappy’, resourceful ingenuity that small business owners should be thinking about. This goes beyond yard signs, and stickers on stop signs – it’s about making a scene. You could go out on the streets of the nearest big-city and interview people like I did… but whatever you do – the point of Guerilla marketing is to draw a crowd and to grab some attention.

What is Guerilla marketing?

In advertising, Guerilla marketing means using unconventional, low-cost, and unconventional tactics to grab attention. Guerilla marketing is all about getting maximum exposure for a company, and examples include pressure washing with a stencil on dirty sidewalks (Domino’s Pizza,) and crazy bus-stop’s shaped like sandwich heaters (Caribou Coffee.) The original term was coined by Jay Conrad Levinson in his 1984 book ‘Guerrilla Marketing’.

Here are some amazing examples of Guerilla Marketing

1. Spray painting a sidewalk, or pressure washing your design with a stencil on a dirty sidewalk.

How to use the concept for your small business: Create a stencil out of clean sheet of hard plastic using an exacto knife and a large print-out of the design you want to pressure wash. I don’t suggest spraypainting the design unless of course that is legal in your area. It’s not like it should be a mystery who did it! 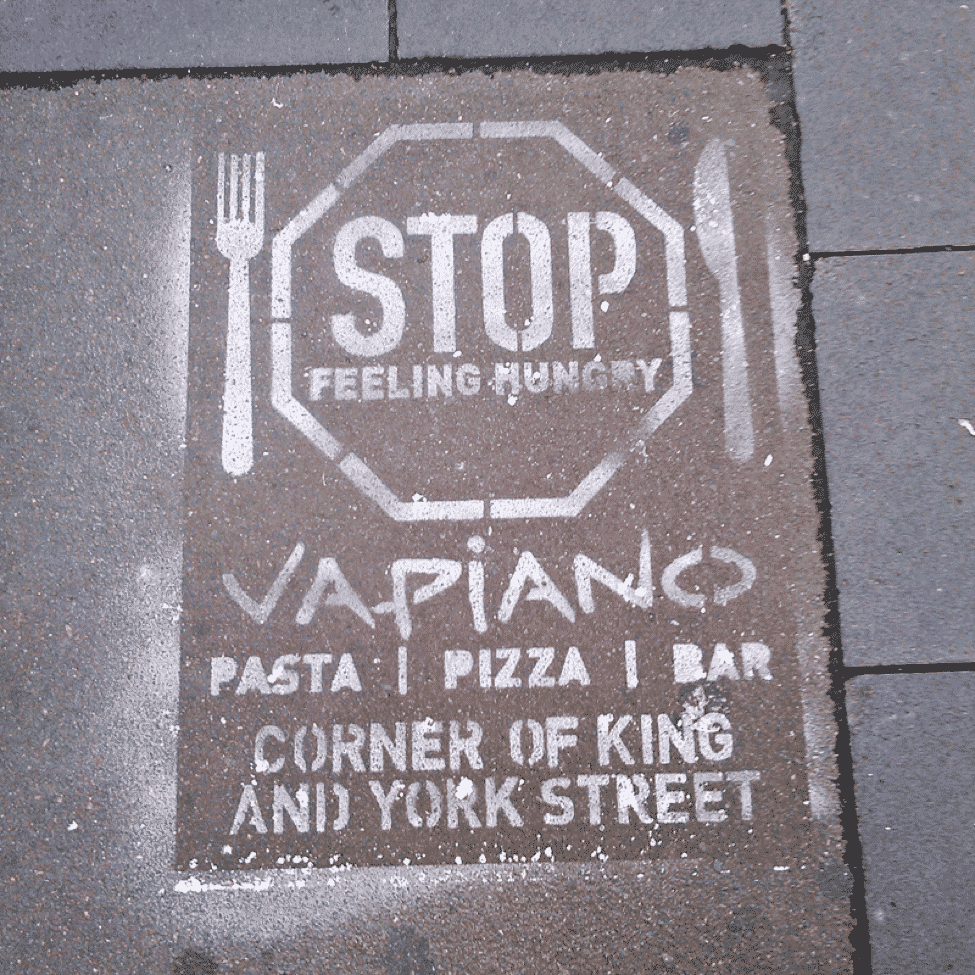 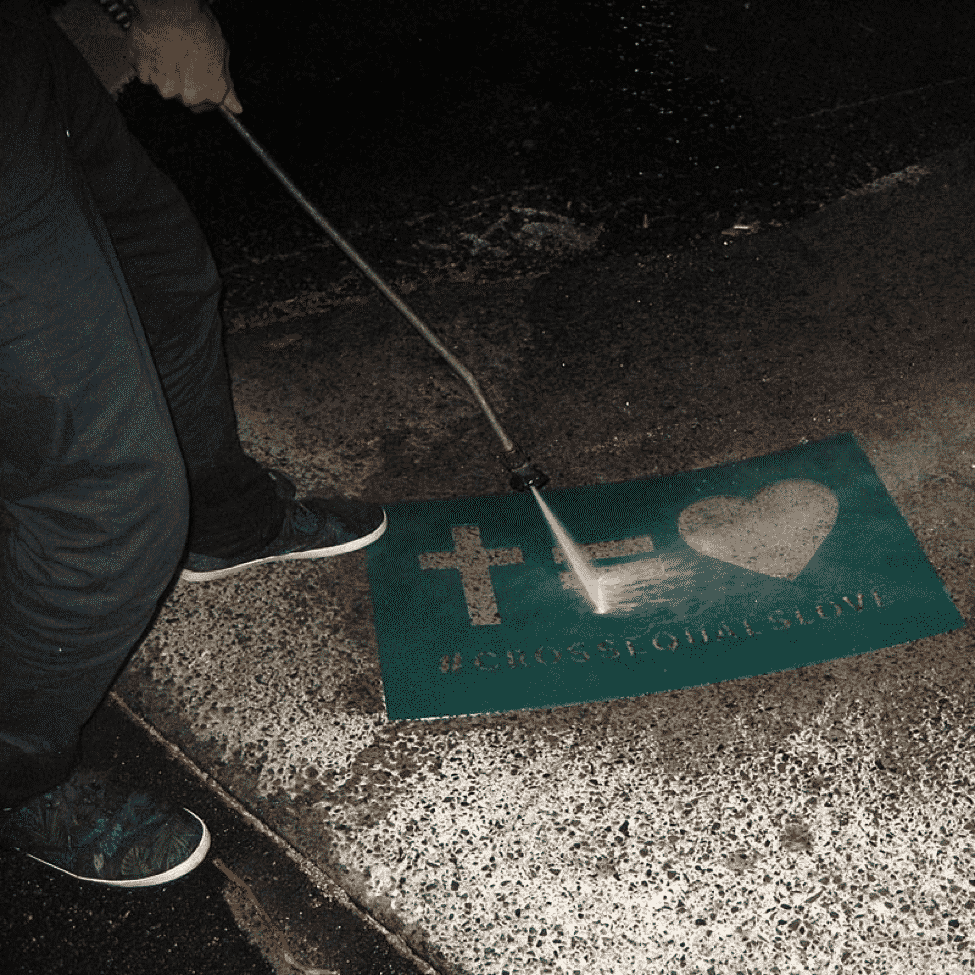 How to use the concept for your small business: Find something larger than life that could be a mixture of art, and an attraction for your business. Have a construction company? What about an installation of a giant hammer, or a mini skyscraper kids can climb? This method of course would require significant time and energy – but could create a lasting impression, and make a photograph worthy little promotion that lasted for years. 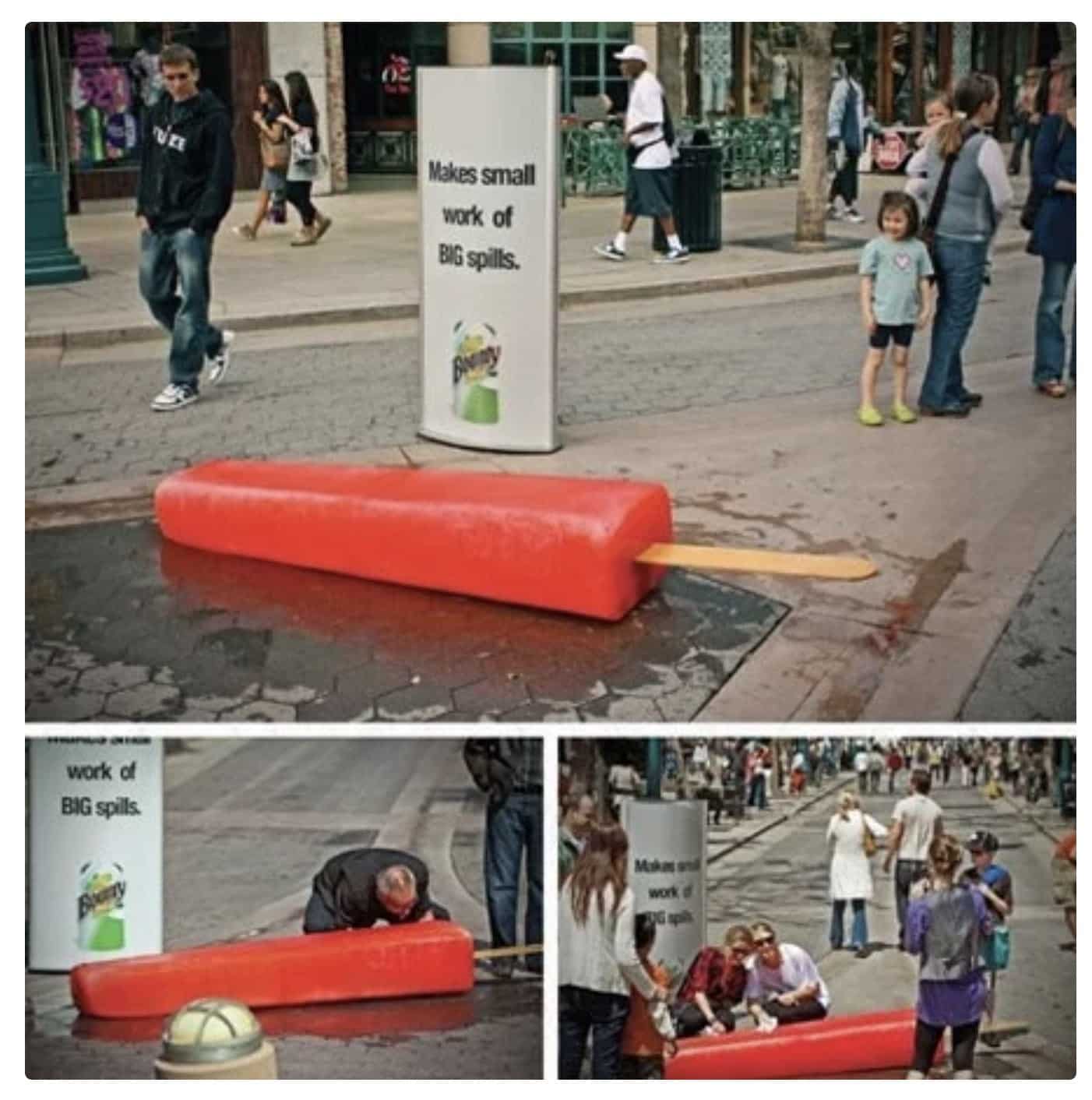 3. Bigfoot 3D – Giant foot imprints on a beach to promote the movie.

How to use the concept for your small business guerilla marketing: What natural elements around your business could be used to create a stunt? Once again, thinking about construction companies – could you make the coolest tree-house any kid has ever seen, and use it as a social media promotion / attraction? 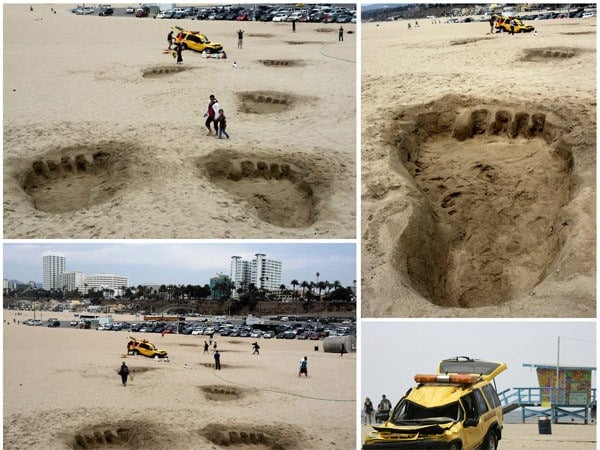 4. Swiss Cancer Foundation – basically put a guy covered in post-it notes out in a park to promote skin protection.

How to use the concept for your small business: What interesting or crazy way could you share your cause or companies information in paper form to the masses? At a tradeshow perhaps – how could you create a booth that doesn’t resemble a traditional booth. Instead it’s a dunk tank, ‘dunk the CEO’ and get a free ‘loss leader’ style promotion. 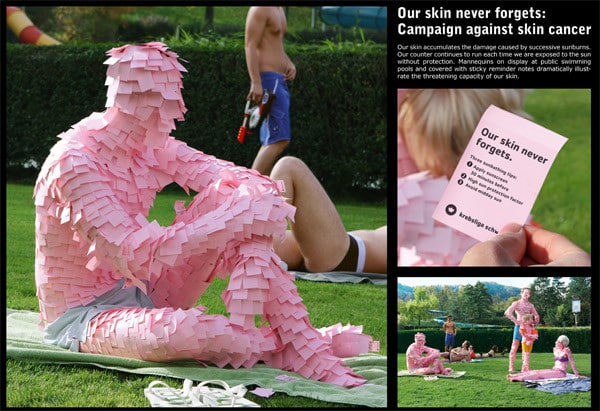 5. Phone message memorial – a scary reminder or the graveness of texting and driving, paired with a somber flower memorial.

How to use the concept: Obviously this one tugs on the heart strings. How could you infuse your promotions with more emotional resonance. Likely it won’t be quite this grim. 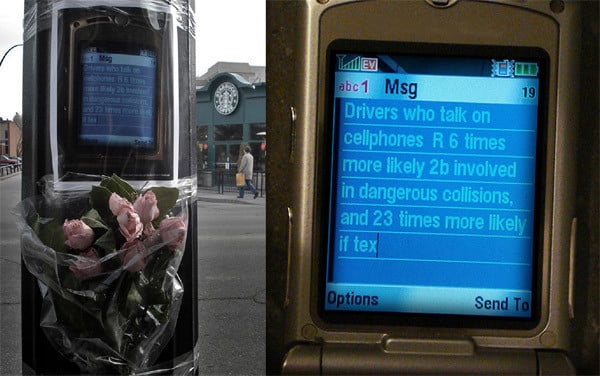 6. Frontline – a promotion on the floor that makes it look like people are fleas on a dog. Giving you the creepy crawly feeling when you look down, but a very effective and remarkable guerilla marketing ad.

How to use this concept: Where could you print a giant ad, that wasn’t a billboard – that could illustrate your key value proposition more effectively?

How to use this concept: Think about the context that your ad is going to be served up in. If it’s a vehicle wrap, or printed on a park bench, or any other 3D object, consider making it look like it’s effecting that object – to grab more attention and get people thinking about you. 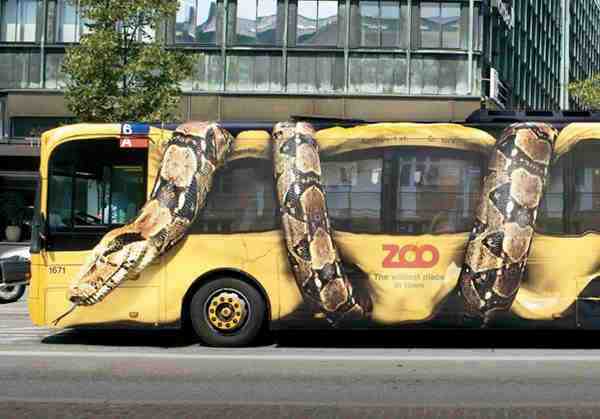 8. Dentist tooth shaped-take a number – definitely stands out on a tree in the middle of a city, and likely any dentist who was brave enough could try this approach to get more visibility, and possibly more clients.

How to use this concept: Print out a ‘take a number’ promotion that snatches people’s attention. It may take a little longer to craft, but to get more attention than other people – you need to spend more time on things that will give you that unfair advantage. 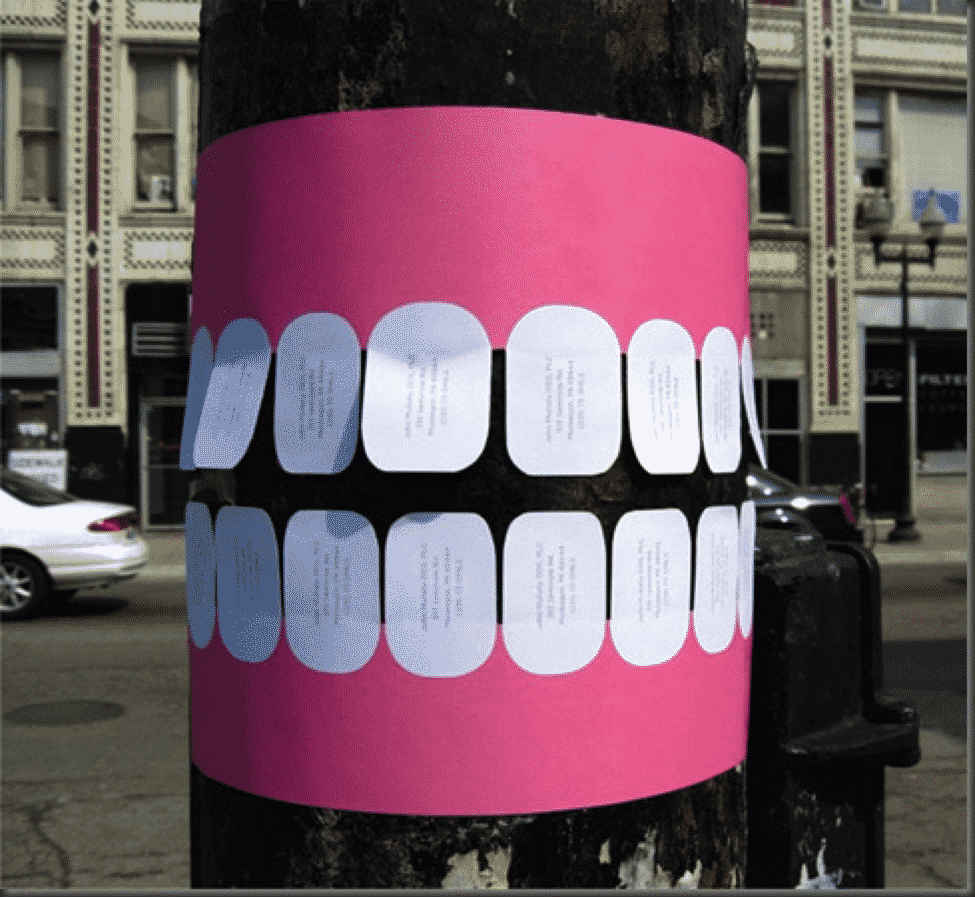 9. Contrive a spot to take a photo – brands have been doing this for years with the concept of a ‘step-and-repeat’ backdrop, like at the red carpet. But you can put something on the ground, you could make a instagram-able nook in your restaurant, or find some other way to get people to take a picture with your brand front and center.

How to use this concept: These ideas go well beyond the initial people who see them if you do it right. If you can get people to take a picture or a video and share it on Instagram and Facebook – the compounding nature of your time and money investment goes up exponentially. So more than anything – try to make it over the top, and a little crazy. 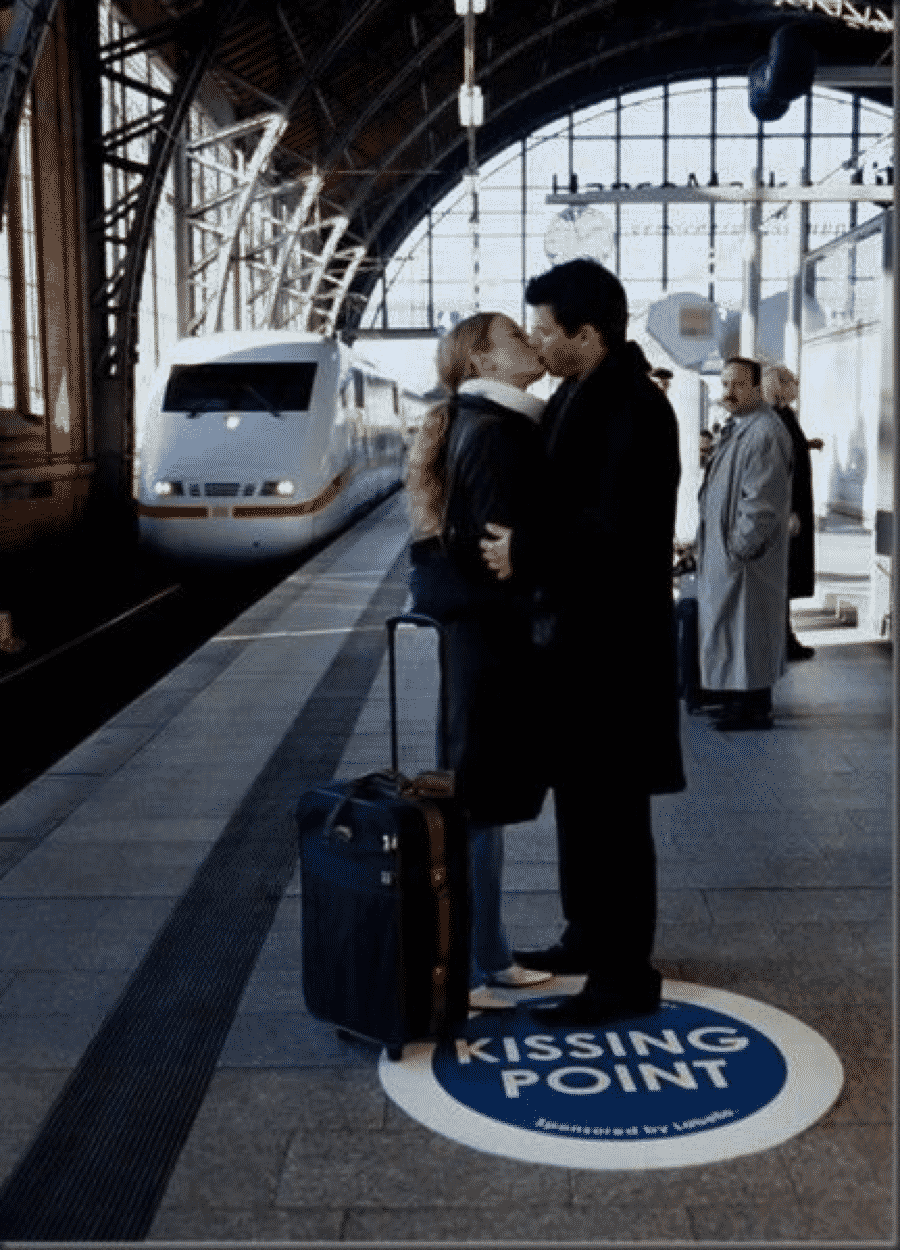 10. You – when you do anything that gets you out of the office, and out of your comfort zone.  Good luck!

Think of something crazy and creative, or just bring your brochure to your customer’s door step, and shake their hands. None of these ad creators have anything that much different than you – they just had a crazy idea and actually followed through with it.

Think of ideas that will get you and your team moving:

How can you get in front of more eye-balls?

What rules do all of your competitors play by that might not really be legitimate and are just in your minds?

In Malcolm Gladwell’s “Outliers – The Story of Success” he talks about how a young little league basketball team stopped taking it for granted that they shouldn’t do ‘full court press’, meaning playing defense right away when they other team brought it in bounds after a score. Even though parents, teachers, and players were mad at them, there was nothing in the rules that made it out of the rules to do this.

Their team excelled wildly, and made it to the championship, where they had once been a mediocre, middle-of-the-road team.

Where are you not currently playing full court press in your business?

How could you find ways to push forward? Think of guerilla marketing as a possible option – but their are likely 1000’s of ways that you could take your business to the next level, where other people aren’t doing it – not because it’s not effective, just because they didn’t think of it, are too lazy to do it, or because ‘people just do it this way.’

Stop taking everything for granted – take advantage of ‘white space‘ in the market.

Thanks for sharing such a nice article and your knowledge with us. Learned a lot from your post.Guerrilla marketing is an advertisement strategy to promote products or services on the streets or other public places with little money.Guerrilla marketing focuses on taking the consumer by surprise to make a big impression about the product or brand.